Kerry Kennedys DUI arrest in a Westchester County, NY highway crash yesterday morning was likely caused by Ambien-induced sleep driving — the same drug responsible for former U.S. Commerce Secretary John Bryson’s crashes in L.A. last month leading to his cabinet resignation.  The details of Kennedy’s crash have all the hallmarks of sleep driving — the bizarre but disclosed side effect which causes users of Ambien to get out of bed and drive their cars while still asleep with no memory of their actions.  It occurred in the early morning, likely just hours after she took the drug.  She continued driving even though she had a flat tire.  She was disoriented.  She remembers nothing of the incident.  And just like in John Bryson’s case, after Kennedy stopped the car at the bottom of an exit ramp, officers found her slumped behind the wheel.While Kennedy reportedly told officers on the scene she’d taken Ambien, spokesman Ken Sunshine later denied she had drugs or alcohol in her system. Sunshine has not yet commented on whether Kennedy may have been sleep driving.
(photo credit-Wikipedia) 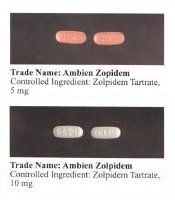 Like Bryson, reports on the Kennedy incident now claim a seizure may have caused it.  That’s despite warnings at the top of each Ambien medication guide advising users that taking it “may [cause you] to get up out of bed while not being fully awake and do an activity that you do not know you are doing [including] driving a car (‘sleep-driving’).”  Many users refuse to believe this side effect can happen to them despite thousands of reported incidents in criminal dockets across the country and in the FDA’s Adverse Event Database.

Ironically, it was her cousin, former Congressman Patrick Kennedy, that first brought public attention to the problem of Ambien-induced sleep driving in 2006 when he crashed his Mustang convertible into a capitol hill barrier at 2 am telling officers he was late for a vote.  Kennedy had gotten out of bed after taking Ambien and an anti-nausea medication. Around the time of Patrick Kennedy’s incident came a class action agains the drug maker complaining of another curious side effect: sleep eating.  Plaintiff’s lawyer Susan Chana Lask cited examples of clients gobbling strange things after partially waking up in the middle of the night — raw eggs, including the shells, and buttered cigarettes.

In the wake of the class action, and more than a dozen officially reported incidents of sleep driving, the FDA required the drug makers to revise the drug’s label.  It now warns the 39 million people who take Ambien that the drug can cause them to eat, have sex or drive without knowing it and with no memory of their conduct.  But it makes no mention of the legal ramifications that users like Kerry Kennedy face if they’re among the unlucky ones to suffer this purportedly rare side effect. (Ambien, made by French drug maker Sanofi, had peak annual revenues of $2.2 billion in 2006, the year before it went, according to IMS Health.)

Defendants in drug-induced legal predicaments like Kennedy have begun invoking a novel legal strategy: the Ambien defense.  Citing the FDA-mandated label, they’ve argued that sleep driving is a side effect not a criminal offense.

Kennedy’s likely to get a fairer shake asserting the Ambien defense than most.  Others defendants have had mixed results.

In some cases, it has worked, saving defendants from serious jail time in cases involving vehicular assault and manslaughter.  This week, 45 year old flight attendant Julie Ann Bronson faces sentencing for a vehicular assault charge resulting from a 2009 Ambien-induced sleep driving incident in San Antonio, Texas.  Bronson drank several  glasses of wine during the evening before later taking an Ambien which the drug’s label warns against.  She pled guilty and faced ten years in prison for crashing into a family of three and severely injuring an 18 month old girl.  Bronson says she recalls taking an Ambien before going to bed and then waking up in a holding cell in her pajamas and barefoot.  ”A lady told me I’d assaulted a woman and a child,” Bronson testified.  ”I’d never hit anyone in my life.  It was surreal.  It was like a bad dream.”  The jury believed she didn’t intend to get into her car and in a ruling last month, gave her probation instead.

Bronson isn’t the first to avoid jail following sleep driving related fatalities.  In 2006, Ki Yong O, a 36 year old lawyer from Andover, Mass. killed Anthony Raucci in an Ambien-induced sleep driving crash.  In November 2007, a judge acquitted O of vehicular homicide ruling he couldn’t conclude “beyond a reasonable doubt” the defendant “was voluntarily intoxicated when he operated his motor vehicle.”  Two years later a Fresno, Calif. jury acquitted Donna Neely, 56, of similar charges resulting from a crash that killed Cho Thao Her, a mother of 11 children.

Others have had less success with the Ambien defense.  Josh Shortt, a Loudon County, Virigina firefighter and cop, was convicted for DUI in 2008 following an Ambien-induced sleep driving crash.  He appealed the conviction — which cost him his law enforcement career — all the way to the U.S. Supreme Court — which declined to hear the appeal in March.

In many cases, like Josh Shortt’s, judges and prosecutors have found the notion of sleep driving inherently implausible despite FDA recognition that it can — and has — happened.  Though the FDA recommended drug makers investigate how and why it happens — no studies have been done.  That may explain why despite the label change, physicians and patients continue to underappreciate the risk of it occurring.

In a forthcoming article in Marie Claire magazine, I’ll be chronicling the Ambien-induced sleep driving phenomenon and the devastating impact the nation’s most widely prescribed sleep drug has had on many unsuspecting users.