ARE JASON AND WENDY FLOM DIVORCED? 5 DETAILS ABOUT THE DIVORCE THAT’S DRAGGING

Jason Flom and Wendy Berry separated in 2010 but their divorce still isn’t final.

Music executive Jason Flom and his wife, Wendy Berry Flom, have been separated since 2010 after being married nearly two decades. Despite years of court proceedings, their divorce is still not finalized. 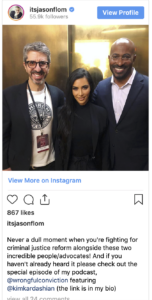 Flom was married to his wife for 20 years before the two engaged in a long divorce battle, which still tangled up in court proceedings. Flom and Berry have a 24-year-old daughter and a 19-year-old son, who were both minors when the parental legal battle began. Flom’s divorce trial from his wife, Wendy, ended in 2015 in Manhattan Supreme Court, but she is still awaiting a settlement decision. In March 2017, a Manhattan court granted the mother of two 40 percent of the couple’s marital assets, estimated at $30 million.

On Thursday, a New York appeals court ruled Berry is entitled to a 50/50 split, according to Page Six. Berry is also getting $26,000 a month in maintenance for six years, and $4,250 a month in child support. However, the divorce proceedings are still now over.

“It is not over. Post-trial proceedings are pending right now for clarification of millions of dollars of property . . . further appeals are forthcoming.” Berry’s lawyer, Susan Chana Lask, told Page Six. Flom’s lawyers claimed Berry never “cooked a meal, dusted a table or mopped a floor.” But the appellate court ruled, “There was no basis to reduce equitable distribution merely because the parties chose to hire domestic help.”

Are Jason and Wendy Flom Divorced? Here’s what we know about the divorce proceedings.

Flom is one of the most prominent names in the music industry. He has served as the chairman and CEO of labels like Atlantic Records, Virgin Records, and the Capitol Music Group. In 1995, he founded Lava Records. Flom is known for founding and helping to grow many well-known artists, including Twisted Sister, White Lion, Stone Temple Pilots, Matchbox 20, Skid Row, Tori Amos, Jewel, Hootie & The Blowfish, Kid Rock, Lorde, Jessie J, and Katy Perry. He was reportedly worth $100 million dollars.

In 2013, A source close to Berry told Page Six: “Wendy insists she was hugely influential in helping Jason’s career and wants half of everything. She claims she helped him establish Lava Records in 2009.

Flom is also one of the founding board members of the Innocence Project, Flom has helped exonerate nearly 350 wrongly convicted people.

2. Berry is fighting to get what she wants from the divorce settlement.

In 2013, a source close to Wendy told Page Six: “Jason does not want to cut the check and pay her the settlement she is demanding. He is saying she had nothing to do with his company. Is she suddenly supposed to enter the workforce again at 50-something?”

According to the article, Berry was “fighting hard to get what she wants and is making a lot of wild claims about Jason.” Flom’s lawyer denied any wild claims about him: “That is absolutely and categorically not true. I do not touch any drugs of any kind, ever. I have [been an advocate] to decriminalize drugs, but I don’t do any drug whatsoever. I don’t smoke pot. I don’t even take NyQuil.”

In March 2016, Page Six reported that although the divorce in court ended in 2015, the settlement decision had not yet been made.

3. Berry is fighting for his property.

In 2015, Flom listed the family’s getaway in Aspen for $7.875 million. The 7,800+ square-foot home comes equipped with six bedrooms and 6.5 bathrooms. The nearly three-quarters of an acre property was right in the celeb-favored ski resort community and was originally listed at $8.25 million.

4. Berry claimed to be broke.

Berry is also a former Atlantic Records executive herself, but according to the New York Post, at one point she couldn’t afford groceries and was dead broke.

“She is behind on her maintenance at the San Remo [apartment building], her parking garage, the baby sitter . . . she can’t afford groceries,” one of Wendy’s friends reportedly told the New York Post.

“He’s cut off all her access to funds,” Wendy’s lawyer Dana Stutman told Page Six at the time. “He’s starving her out.”

Meanwhile, Flom was living primarily in New York City in 2015 where he was renting a lavish condo on the 67th floor of the same Upper West Side highrise where Sean “Diddy” Combs owned property.

Apparently, Flom lost millions of dollars when he invested with Ronnie Gilley who is now serving a six-year and eight months federal prison sentence for pleading guilty to offering bribes to Alabama legislators to legalize gambling in the state.

“Jason maintains that Wendy is responsible for half the loss,” Berry’s friend told the Post in 2016.