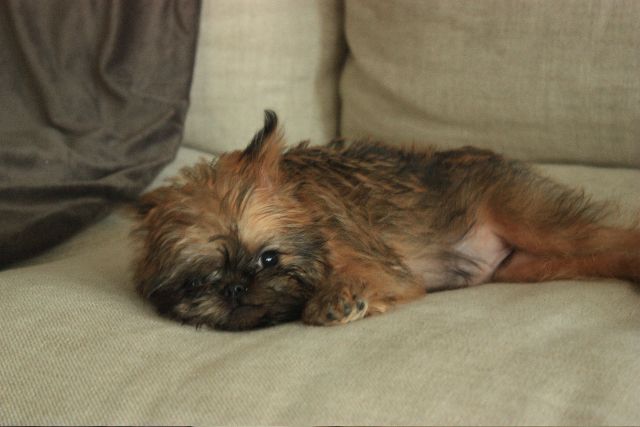 Umka’s owner has filed suit claiming the dog should be recognized  as a living soul and not property.

Do puppies have souls? That’s what an unusual lawsuit is asking a New York judge to decide.

In her civil suit, dog owner Elena Zakharova contends that pets — considered “property” under state law — are much more than that: living creatures that feel love and pain.

Zakharova says the upper East Side pet store that sold her a pooch with bum knees and trick hips should be liable for the pup’s pain and suffering, as if it were a person.

She also wants compensation for her astronomical vet bills: $4,000 so far, with another $4,000 on the horizon — a total of about $1,000 a pound for the fuzzy year-old Brussels Griffon she named Umka.

“Umka feels love and pain like any human being whose pain and suffering would be recognized in a court.”

Amid the proliferation of shady puppy mills that churn out “purebred” dogs with congenital heart and joint problems, New York State has a “Puppy Lemon Law” that lets buyers return a sick animal in 14 days.

But Lask says it took months for Umka’s problems to surface. The 2-month-old puppy, Zakharova bought last February for $1,650, didn’t start limping and whimpering until July.

Despite extensive and painful surgery, the dog will never walk or run properly.

“Umka suffers a disorder causing her pain, her legs hurt, she cries when she is in pain, she drags herself with her front paws, she cannot run like other puppies,” the suit reads.

“She should not have been sired by dogs with genetic disorders,” it says.

If the judge won’t recognize Umka’s suffering, Lask said she will argue the dog should be subject to the Uniform Commercial Code that gives a buyer four years to return a “defective product.”   The store Umka came from, Raising Rover in Carnegie Hill, says it is under new management.

“I know nothing about the sale. The prior owner has all the records. We are very careful about where we get our puppies,” said owner Ben Logan, declining to provide any information about the prior owner.

The Humane Society said Raising Rover is one of 11 swanky “pet boutiques” revealed by a 2011 undercover investigation to be buying animals from Midwestern puppy mills with horrific records of animal cruelty.

Lask said the ultimate goal of the lawsuit is to increase the penalties on pet stores so they stop selling animals from unhealthy breeders.