March 16, 2006 – Lori Cox didn’t remember ordering the ring she had just got in the mail. But her phone records said otherwise, showing she’d made a middle-of-the-night call to a home-shopping channel. Even worse, she also discovered she’d made cell-phone calls to her ex-boyfriend in her sleep. And a few times, she woke up to find empty beer bottles and cracker crumbs in her kitchen—evidence of predawn snacks she didn’t remember eating.  “It’s scary,” she says. “One side of your brain is asleep and the other side is directing you into this secret life.”

What caused the odd behavior? Cox believes she has found the answer: Ambien. Cox began taking the sleep medication a year ago, after a traumatic breakup with her longtime boyfriend kept her awake at night. Until recently, Cox thought she was 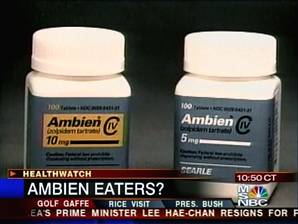 alone with her odd nocturnal habits. But recent weeks have seen a spate of reports about patients blaming strange behavior on America’s most popular sleep aid. Some patients drove in their sleep and ended up in accidents with no recollection of them the next morning. Others report eating or, like Cox, shopping in their sleep after taking the drug. Earlier this month, after interviewing a number of patients across the nation, New York City attorney Susan Chana Lask filed a class-action complaint citing clients who’d driven, shoplifted and feasted on raw eggs and uncooked vegetables in their sleep after taking Ambien. In the most serious case, a New York lab technician was actually assaulted twice after taking Ambien when she opened her door for a stranger—something she says she never would have done had she been conscious of her actions. Lask says she has now been contacted by about 200 others who’ve experienced similar effects, and expects more reports to come. Even if only 1 percent of those who take the popular sleep drug experience such side effects, she tells NEWSWEEK, “One percent of 26 million prescriptions is a lot.”

Sanofi-Aventis, the maker of Ambien, is defending its drug. The French-based pharmaceutical company issued a statement stressing that such side effects are rare and that—when taken as prescribed—the sleep aid is a “safe and effective” treatment for insomnia. Company spokeswoman Melissa Feltmann emphasizes that while sleepwalking is a possible but uncommon side effect of Ambien, some of the reported cases might not necessarily be caused by the drug. (In approving Ambien and another popular sleep aid, Sonata, the U.S. Food and Drug Administration [FDA] cautioned that they be used only for short periods—usually no more than a week to 10 days—because longer-term studies of their safety and effectiveness have not been done.)

Bad publicity, however, inevitably comes at a price, and one question now is how much it will affect the pharmaceutical company’s bottom line. Some analysts believe that as long as the side effects are not perceived as dangerous, and are restricted to a small group of users, the drug will still remain popular.  But if the negative reports discourage others from taking Ambien—or the side effects lead to more serious incidents—the effect could be much worse for Sanofi-Aventis.  “The litmus test is how far these cases go,” says brand consultant Alycia de Mesa. “If it becomes worse in terms of more people experiencing these side effects or if someone shoots someone and then says they were on Ambien, that will really backfire on the brand.”

So far, though, the news seems to have had minimal effect on the company’s share price. In the past week, it’s actually climbed from about $43 to $45 a share. And analysts don’t seem too worried. “I’m not convinced this has a big impact on sentiment,” says Paul Mann, an analyst at Deutsche Bank. “If the class-action lawsuit were in the thousands, that might be different. But we’re not talking about deaths here. I don’t think they’re looking at that kind of liability.”

Indeed, industry experts had already forecast a slowdown in Ambien sales as other medication entered the market. Lunesta, the first sleep aid to be approved by the FDA for long-term use, was released last spring; another insomnia drug, Rozerem, was approved last summer, and Pfizer is hoping to gain approval for its sleep aid indiplon, codeveloped by Neurocrine Biosciences, later this year. Prescriptions for Ambien have been rising steadily since 2001, but now they’ve begun to level off as the number of competitors has grown. And Ambien is facing the loss of its patent protection at the end of this year, which will open it up to generic competition, as well. According to IMS Health, a health-care information company, Ambien sales topped $2.1 billion last year. But in a recent report, Morgan Stanley analyst Andrew Baum estimated that sales of the drug will fall 12 percent this year (though Ambien CR, the new controlled-release formula approved last year for insomnia, will add another $679.5 million in sales). And in 2007, he predicts sales of Ambien will drop by more than half.

Deutsche Bank’s Mann says investors are more focused on Sanofi-Aventis’s other drugs like Plavix, Eloxatin and the anti-obesity drug Accomplia, which is expected to gain FDA approval later this year. Plavix, a popular anti-clotting drug, is also facing a challenge to the patent, which it must contest in court this spring. And a recent study raised doubts about Plavix’s efficacy, finding that adding it to a daily dose of aspirin in patients at high risk for cardiovascular disease didn’t lower their risk of stroke or heart attack—and that the addition of Plavix could even increase the risk of a cardiac complications in some. The company had been counting on Accomplia to be the next big blockbuster. But that is not a given either. Sanofi-Aventis is hoping to market the drug as not just a fat-fighter but as a means to help lower blood pressure and an aid in quitting smoking. The FDA, though, has seemed reluctant to issue approval for any indications beyond obesity at this point. In a recent report, Bear Stearns analysts said they “remain cautious about Accomplia’s commercial potential.”

The news is better for Sanofi-Aventis’s Eloxatin. Sales of the drug, which is used to treat colorectal cancer, are expected to grow for the next several years. (Morgan Stanley’s Baum forecasts 17 percent growth in sales this year alone). Many analysts say that the Sanofi-Aventis stock price is undervalued at its current level and expect the drug maker’s overall sales to continue moving upward. Will strong sales of other drugs be enough to offset any large drop in Ambien sales? It’s not clear. But Sanofi-Aventis is hoping it doesn’t have to find out.

Patients, meanwhile, are developing their own strategies. Cox said her strange nocturnal behavior stopped after she switched from Ambien to Lunesta, but she does still take Ambien occasionally.  Only now, before she pops a tablet, she tapes Post-It notes to her telephone instructing her not to make any calls.