The lawyer for the Manhattan dog owner who is taking an Upper East Side pet shop to court over the animal’s “pain and suffering” compared the pooch to a child, saying today the puppy is worth more than property.

The suit, filed on behalf of “Elena Zakharova for herself and as representative of her dog, Umka,” contends the petite Brussels Griffon should be recognized as a living being instead of property, as state law currently contends.   PAINED POOCH SUES   “[Zakharova] can get pain and suffering damage and they’re worth a lot more than the puppy lemon law that gives you the value of the dog,” said noted animal-rights lawyer Susan Chana Lask.

“How can we value her pain and suffering?” she asked. “So let’s compare it to a 7-year-old child that slipped and fell.” 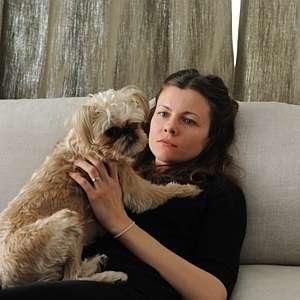 Zakharova bought Umka at the Raising Rover shop last February for $1,600. The Russian native said she’d been looking to buy a male, but “I saw [Umka] and she picked me. It was love at first sight.”   At a news conference today, Zakharova said, “I’m very emotional so I was crying nonstop. I couldn’t sleep.”   Unbeknownst to Zakharova, however, the store had a history of selling puppy-mill dogs, according the Humane Society of the United States.   After initially being found healthy by a veterinarian recommended by the pet store, within months Umka was limping and crying in pain.

In July, she was diagnosed with a bum knee, and the vet said she needed surgery. She also had problems with her other three knees and her hips, the suit says.   The suit claims Ranging Rover failed to give Zakharova information about the breeder of the puppy, or that the dog likely came from a puppy mill.   The action seeks money for Umka’s medical costs, as well as an unspecified amount for her pain and suffering.   Filed by Lask, the suit “requests humanity for Umka in that she be considered a living soul that feels pain, and that her pain and suffering is recognized by this state and considered as damages to her.”   “We are trying to get precedent that she’s not property. I don’t know if the judge will go for it,” she admitted.

Ben and Gosia Logan, the current owners of Raising Rover and who are not named in the suit, said in a statement that Zakharova purchased Umka prior to their owning the store.   “We take selection very seriously, and we do comprehensive background checks before engaging with any new breeder,” the statement said. The couple says they have tried to reach out to Zakharova but “those phone calls were not returned.”