A man was kept in jail and stripped searched twice in a week for a minor traffic fine he had already paid.

Albert Florence, 34, was hauled out of his car by a highway patrol man who was given false information by a police computer that there was an outstanding warrant against him.

He had been stopped several times before for the cleared fine, and even carried a letter absolving him of the offence. Despite this, he spent a week in two county jails where he was subjected to the humiliating strips searches before being cleared by a judge.

Trial: Albert Florence was the passenger in a car when it was pulled over and he was arrested for an outstanding warrant based a supposedly unpaid fine

Speaking to the New York Times, Mr Florence spoke of how he was told to ‘Turn around,’ while he stood naked before several guards and prisoners, before being told: ‘Squat and cough. Spread your cheeks.’

He added: ‘I consider myself a man’s man.

There was no reason to believe he might be smuggling drugs or a weapon into jail.

Indeed, Florence says, there was no reason at all to think he might be going to jail.

Florence said he should never have been ordered to undress for the searches, much less been arrested.

Mr Florence’s problems arose on a March day in 2005, as he was heading to dinner at his mother-in-law’s house with his pregnant wife and 4-year-old child.

His wife, April, was driving their BMW, when a state trooper stopped the family SUV on a New Jersey highway.

Justice: Mr Florence is hoping to challenge his case in the Supreme court

Mr Florence identified himself as the vehicle’s owner and the trooper, checking records, found an outstanding warrant for an unpaid fine.

His protest was in vain, however, and the trooper handcuffed him and hauled him off to jail.

At the time, the State Police were operating under a court order mandating federal monitors to assess state police stops of minority drivers.

However Mr Florence is not alleging racial discrimination.

Six days later, Florence had not received a hearing and remained in custody.

Transferred to another county jail in Newark, he was strip-searched again.

The next day a judge freed Florence and dismissed all charges. The fine had been paid, as Florence had insisted. 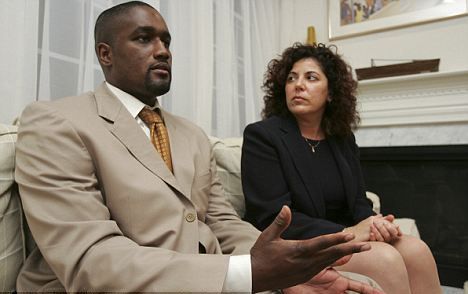 Campaign: Albert Florence with his attorney Susan Chana Lask. The Supreme Court is likely to decide this month whether to hear Florence’s case against officials in New Jersey

He sued over his treatment, but a divided panel of federal appeals court judges in Philadelphia said that it is reasonable to search everyone being jailed, even without suspicion that a person may be concealing a weapon or drugs.

Most other federal courts have ruled otherwise, and now Florence is asking the Supreme Court to take his case.

A decision on whether the justices will hear the case could come Monday.

The Constitution’s Fourth Amendment does not prohibit all searches, just those determined to be unreasonable.

Mr Florence argues that even if his arrest were valid, jailhouse searches were unreasonable because he was being held for failure to pay a fine, which is not a crime in New Jersey