You are here: Home / Print / Today: Lask to Change Puppies from Property

When Elena Zakharova looks into the eyes of her puppy as it suffers from bad knees and achy hips, she does not see a defective product to be returned to the store for a refund.

The New York City resident believes Umka, her 1-year-old Brussels Griffon, is a living soul who feels pain and emotion. Now her attorney aims to prove it in court.   Zakharova has filed a civil suit in a New York court against the Upper East Side pet store that sold her a puppy who went on to develop numerous medical complications. The suit seeks to hold the store liable for the dog’s pain and suffering, as well as its medical bills, as if it were a person rather than an inanimate product. 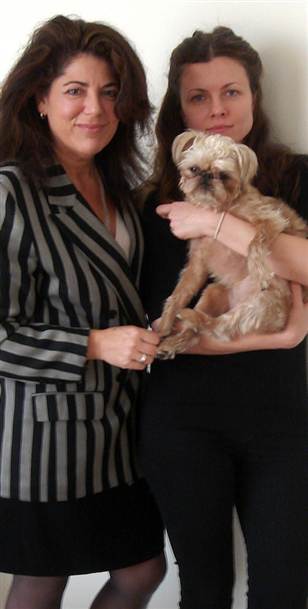 Under New York law, pets are considered “property,’’ but the complaint is trying to change that definition. The ultimate goal is to help shut down the puppy mills, many of them based in the Midwest, that often mass-produce the animals sold in boutique pet stores like Raising Rover, where Umka was purchased.

“Umka is a living soul with a heart,’’ the suit reads. “She feels love and pain.’’ The ownership of Raising Rover has changed since Zakharova purchased Umka. I know nothing about the sale [of Umka]. The prior owner has all the records. We are very careful about where we get our puppies,” Raising Rover owner Ben Logan told the New York Daily News, which first reported the story of Zakharova’s unusual complaint. Logan declined to provide any information about the prior owner.

Zakharova is seeking compensation for past and upcoming surgeries and other medical treatment involved with Umka, which totals at least $8,000. She also wants a full return of the dog’s sale price plus interest since the date of purchase in February of last year. If Zakharova is awarded the money, she will donate it to an animal charity or animal-rights program, Lask said. New York state currently has a “Puppy Lemon Law’’ that allows buyers to return a sick animal to a pet store within 14 days for a full refund. One objective of that law is to slow down puppy mills’ mass production of dogs that end up having heart conditions and other ailments. However, in a case like Umka’s, the medical issues did not become apparent for months after Zakharova purchased the dog. The suit claims Umka will never walk or run properly again after several surgeries.

“Umka suffers a disorder causing her pain, her legs hurt, she cries when she is in pain, she drags herself with her front paws, [and] she cannot run like other puppies,” the suit reads.

If the definition of a pet is changed from that of property to an animate being with feelings, it could substantially change the amount of damages that could be awarded when an owner buys a defective dog born in a puppy mill, according to Lask. That could, in turn, have a chilling effect on pet stores buying animals from puppy mills out of fear of getting slammed with large payouts from lawsuits.

“It’s going to put a number on my dog’s broken hips that you created because you’re negligent, you’re greedy, and you’re mass-producing these puppies,’’ Lask said. “Right now, even if you return it, they just kill it, which is so inhumane.’’

Lask is an animal lover who owns a Chihuahua named Lincoln who was found to have a hole in his skull months after her purchase. That discovery led her to investigate the practices of shady puppy mills. She has waited six years to bring a case of this nature, fielding calls from other pet owners in the past, but felt Zakharova is the perfect client to help correct a larger issue. “It’s much bigger than this case,’’ she said. “I am looking to shut down the puppy mill world.’’

The main issue will be proving to a judge that pets are living souls who experience feelings of pain and emotion.

“It’s a leap,’’ Lask said. “Human beings themselves have treated other humans as property in history before recognizing it was wrong. People will say this isn’t a human being, but they have a heart, so it’s not too much of a stretch to ask the courts to change the definition. Then we’ll see how quickly pet stores think twice before buying from puppy mills. “It’s already a felony to abuse an animal. If I kick my Chihuahua and beat it, I’m getting arrested, so that animal has rights. If they have criminal rights, why not put rights on a damaged leg or a heart condition? If we’re not equating [an animal] to a human being, and we’re not equating it to a table, there has to be something in the middle.’’

Whether the suit is successful or not, it brings to light the practices of puppy mills and their damaging effects on animals and their human owners, animal rights advocates say. “I don’t know where this case is going to go, but it’s good that it brings awareness that pets are not just a commodity and that we have to take this seriously,’’ said Sandra DeFeo, executive director of The Humane Society of New York. “We feel that animals are living, breathing beings, not a piece of furniture or inanimate object. People develop relationships and bonds with these animals, and you see how distraught they are when the animals pass away.’’

A 2011 investigation by The Humane Society of the United States revealed that Raising Rover, where Umka was purchased, was one of 11 upscale pet stores that purchased animals from Midwestern puppy mills with horrendous conditions.