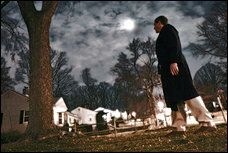 There is no reliable estimate of how many Ambien users
sleepwalk, and no one knows who might be at risk. The
prescribing information for Ambien lists somnambulism as
a “rare side” effect, meaning that it has been reported in
fewer than one in 1,000 patients.
(Photo Illustration By Bill O’Leary – The Washington Post)

The most prescribed sleep medication in the United States may be linked to episodes of sleepwalking and related strange and dangerous behaviors, experts say — including incidents of nocturnal eating, phone conversations, shoplifting and even driving — of which the subject has no memory.

Sleep specialists and researchers cite a growing though still inconclusive body of reports associating Sanofi-Aventis’s drug Ambien with the incidents. More than 24 million prescriptions for Ambien were written in 2004.

Timothy Morgenthaler, a researcher at the Mayo Clinic Sleep Disorders Center in Rochester, Minn., says he has seen many cases of people who sleepwalk and sleep-eat after taking Ambien.

He described five such cases in a 2002 report in the journal Sleep Medicine. All those patients stopped having sleep-eating episodes when they discontinued Ambien, Morgenthaler said. Since then he has seen many similar cases, he said.

“I feel pretty comfortable that this is a real phenomenon,” he said.

Sanofi-Aventis, the French maker of the drug, declined to make officials available for interviews. The company issued a statement saying the side effect is known but rare, and that “when taken as prescribed, Ambien is a safe and effective treatment for insomnia.” The side effect is disclosed in the product’s full labeling material, where it is cited among numerous central nervous system side effects.

Other case reports of Ambien-related sleepwalking have been published in medical journals, and researchers of the Minnesota Regional Sleep Disorders Center reported 19 additional cases at a medical conference last year.

Reports made to the Food and Drug Administration (FDA) by doctors and patients show more sleepwalking incidents associated with Ambien than with all other sleep aids combined.

None of these observations proves Ambien causes sleepwalking, and questions about the side effect were not raised during the FDA’s preapproval review of the scientific data. The agency approved the drug in 1993.

Ambien and other newer sleep drugs are considered safer than previous types, in that they are believed to be less addictive and less toxic even in overdose.

The case of lifelong insomnia sufferer Janet Makinen is typical of the Ambien incidents.

The 55-year-old resident of Dade City, Fla., said she took Ambien nightly for six years. During that time, she regularly got out of bed after having fallen asleep, went to the kitchen and ate, she said.

She would find evidence of her night eating afterward, she said, but had no memory of doing it.

Makinen, identified via an Internet message board where people share Ambien stories, was interviewed late last year. She has since become a plaintiff in a class-action lawsuit against Sanofi-Aventis filed in federal court on March 6.

Others involved in the lawsuit face criminal charges for things they have done while they say they were sleepwalking on Ambien, including driving and shoplifting. One alleges she was twice sexually assaulted after taking Ambien, and has only partial memories of the incidents.

Susan Chana Lask, a New York lawyer who represents the plaintiffs, says that besides seeking damages, they hope to force the drug company to provide stronger cautions about sleepwalking. “People need to know about the risks of serious problems associated with this drug,” she said.

Sanofi Aventis declined to comment on the suit, which a spokesman said the company had not seen.

Dozens of Ambien users have reported being involved in auto accidents they do not remember, according to news reports and interviews.

Some sleep experts interviewed said the side effect is increasingly familiar to academic and research sleep specialists. But many mainstream sleep clinicians see no problems with the drug, interviews showed. No expert interviewed said he or she had stopped prescribing Ambien due to fear of side effects.

Helene Emsellem, medical director of the Center for Sleep and Wake Disorders in Chevy Chase, says she has seen no link between Ambien and sleepwalking in her practice, which is one of the largest of its type in the region. “Nor do we see [Ambien] standing out as problematic” among other available sleep medications, she said.

Somnambulism, the clinical term for sleepwalking, is a “partial arousal” disorder, in which a person is not fully asleep but not completely awake.

In addition to medications, sleepwalking can be triggered by sleep deprivation, alcohol, fevers, stress, and some mental and neurological conditions.

Ambien may render some people unable to awaken completely even when something significant disturbs their sleep, so they enter the state of partial arousal, some experts say. “It is the case, perhaps, of an unstoppable force meeting an immovable object,” said Michael Sateia, chief of the Section of Sleep Medicine at Dartmouth-Hitchcock Medical Center in Lebanon, N.H., and past president of the American Academy of Sleep Medicine.

According to Stacia Sailer, medical director of the Sleep Disorders Center at the University of Massachusetts, Amherst, some people taking sleep medications (not just Ambien) can, in that partial state of arousal, carry out many routine activities. The case of Lt. Judith Renee Lasswell, 39, a Navy intelligence officer stationed in Tampa, included several bizarre incidents, including a case of alleged shoplifting that threatens her military career.

According to the complaint in the class-action suit, she once wandered into the intelligence center where she works talking incoherently, and her colleagues led her back to bed. She said she has no memories of the episode.

But most damaging was an incident last September when, after taking Ambien, Lasswell said she sleepwalked into the base exchange, carrying several DVDs which she had purchased previously or rented from the base library. After returning an “X-Files” DVD to receive store credit, she was approached by base police, who claimed she had taken the DVD off the shelf, failed to pay for it and returned it for credit. She was handcuffed and charged with shoplifting DVDs and a candle.

Lasswell said she has no memory of the incidents.

According to the complaint, Lasswell’s top-secret security clearance was subsequently revoked, and she faces larceny charges and a dishonorable discharge. A 17-year Navy veteran, she risks losing her pension and severance pay.

“I’ve never had a problem before in my life until I took Ambien, and it’s literally ruined my career and everything I ever worked for,” Lasswell said in a statement. “I have gaps in memory from the whole time I was on Ambien, which is very terrifying.”

In January, Lasswell requested a polygraph test to support her defense in the military judicial process. According to the test report, a copy of which was provided by Lask, Lasswell denied intending to steal and falsely claiming store credit, and said she did not remember the events related to the incident. The polygraph examiner found “no deception” in her responses, according to the report.

There is no reliable estimate of how many Ambien users sleepwalk, and no one knows who might be at risk. The prescribing information for Ambien lists somnambulism as a “rare” side effect, meaning that it has been reported in fewer than one in 1,000 patients.

Sateia says a lack of solid data on post-approval side effects makes it impossible to know whether the company’s estimation of the rate is accurate.

After a drug is approved and marketed in the United States, the FDA accepts (but does not actively solicit) reports of side effects from doctors, patients and drug makers. FDA adverse event report databases contain sleepwalking reports from 1997 through June 2005. (Ambien has been available in the United States since 1993, but sleepwalking events per se were not reported before 1997.)

There are 207 sleepwalking reports. Most of the incidents are considered “idiopathic” by physicians reporting the episodes, meaning their cause is not known. Of all sleep aids, however, Ambien is linked to the most incidents — 48 of them, or about a quarter of the total.

The data contain two reports associated with Sonata, a drug that acts in a way similar to Ambien. Sonata was approved in 1999. The data contain no sleepwalking reports for Lunesta, the newest sleep drug, which was not widely available until April 2005.

There are also fewer reports linked to older sleep aids called benzodiazepines, including Ativan, Halcion, Restoril, Valium, and Xanax. For these six drugs, which when considered as a group were prescribed more times than Ambien, there are 18 reports collectively.

Larry Sasich, a pharmacist and consultant to Public Citizen, a consumer advocacy group, says the adverse event reports “raise a legitimate question” about a possible association between Ambien and sleepwalking, particularly since “what winds up in the FDA’s database is only the tip of the iceberg.” Researchers believe that only a small portion of adverse drug reactions are reported to the FDA.

Adverse event data must be interpreted carefully because many things affect what is reported and how often. Sleepwalking is particularly tricky to track. It’s not like liver failure, for example, which unmistakably either happens or does not. Many people may never find out about their sleepwalking or may not understand what they experienced. Others are reluctant to report it: “People do not volunteer this information,” Morgenthaler said. “If you do not ask specifically about this behavior, you will miss most of it.”

“In a sane world . . . [reports like those for Ambien] would be an occasion for FDA to ask the manufacturers to do careful surveillance,” said Jerry Avorn, chief of the Division of Pharmacoepidemiology and Pharmacoeconomics at Brigham and Women’s Hospital, a Harvard Medical School affiliate. “But they’re not going to do that.”

Meanwhile, Sanofi has introduced a new formulation of Ambien, called Ambien CR, designed to sustain sleep throughout the night. Sonata and Lunesta are spending hundreds of millions of dollars on advertising to battle for market share, and competing drugs are working their way toward approval. Consumers are being sold on the benefits and safety of sleep medications as never before.

“That can give patients, and physicians for that matter, the impression that the management of [sleep] problems is as simple as giving someone a prescription for a sleeping medication and sending them on their way,” Sateia said. “It’s not that simple.” ·

Martin F. Downs is a freelancer in Meriden, N.H. Join Michael Sateia of the Dartmouth-Hitchcock Medical Center today at 1 p.m. for a Live Online chat on sleep disorders and reported Ambien side effects at