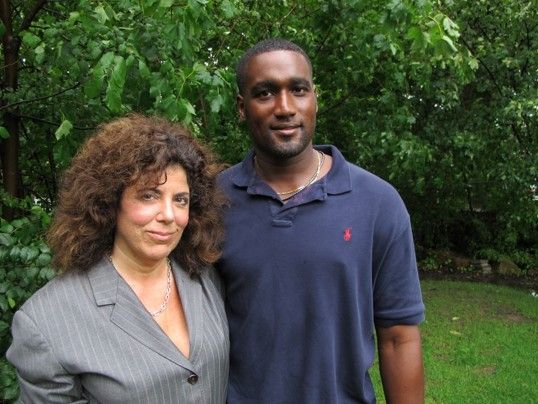 Robert Barnes/WASHINGTON POST – Albert Florence and his lawyer Susan Chana Lask.
The Supreme Court next month will hear his case about whether jail officials violated
Florence’s constitutional rights by strip-searching him after he was detained on a minor offense.

By Robert Barnes, Published: September 12, 2011
NEWARK — Almost everyone can agree that what happened to Albert Florence in 2005 sounds shocking.

A New Jersey state trooper pulled over their car as Florence and his family were on their way to his mother-in-law’s to celebrate their new home. He was handcuffed and arrested in front of his distraught, pregnant wife and young son.

He spent seven days in jail because of a warrant that said, mistakenly, he was wanted for failure to pay a court fine. In fact, he carried proof that the fine had been paid years earlier.

And he was strip-searched twice, the humiliation that he says most remains with him six years later.

“I wouldn’t wish it on my worst enemy,” Florence, 35, said in a recent interview, describing how he was forced to strip with other men and be examined by a guard.

But the question for the Supreme Court next month — when it will weigh an individual’s privacy right against the interest of jailers in maintaining safety and security — is whether such strip searches are unconstitutional.

Florence says that strip-searching him for a minor offense without any reason to believe he was smuggling contraband into the jail violated his Fourth Amendment protection against unreasonable searches and seizures.

The class of those joining Florence’s suit against two New Jersey jails includes, according to the brief he filed with the court, those who were strip-searched after being detained for “driving with a noisy muffler, failing to use a turn signal, and riding a bicycle without an audible bell.”

For nearly three decades after the Supreme Court decided a case called Bell v. Wolfish, federal courts interpreted the ruling to mean jailers must have reasonable suspicion before strip-searching those they detain on minor charges.

But more recently, appeals courts in Atlanta, San Francisco and the one in Philadelphia that ruled against Florence have disagreed. They said the Fourth Amendment does not forbid a blanket policy of strip-searching those sent into the general prison population, no matter the charge.

“It is self-evident that preventing the introduction of weapons and drugs into the prison environment is a legitimate interest of concern for prison administrators,” Circuit Judge Thomas Hardiman wrote for the divided panel that rejected Florence’s argument. The jails’ security interests outweighed Florence’s privacy rights, he said.

Law enforcement officials, lawyers, civil libertarians and politicians are just as divided as the courts.

The American Bar Association, which is supporting Florence, said a policy allowing strip searches of all who are arrested would mean a drastic expansion of a procedure that the Supreme Court has called so intrusive it falls “into a category of its own.”

“Nearly 14 million Americans are arrested each year,” the ABA wrote in its brief to the court, and many “do not involve violence or drugs and do not suggest a motive or opportunity to smuggle contraband into a prison.”

But an array of states, municipalities and the Obama administration are supporting the two jails Florence is suing — in Burlington County and the Essex County Correctional Facility here, in a rough-looking part of town near the Newark waterfront.

“In the prison and jail context, privacy rights are necessarily diminished,” new U.S. Solicitor General Donald B. Verilli Jr. wrote to the court. “Corrections officials are afforded wide latitude to ensure the safety and security of their facilities.”

Florence says jailers had no reason to believe he was a security risk.

A finance manager for a car dealership and now father of four, Florence had a run-in with law enforcement in 1998. For driving off after a traffic stop, he was charged with obstruction of justice and use of a deadly weapon (the vehicle).

He pleaded guilty to lesser charges of hindering prosecution and obstructing the administration of law. He did no jail time but was fined $1,500.

When he fell behind in payment, a Newark judge issued a warrant. But Florence paid up, and he kept the document certifying that fact in the glove compartment of his BMW. “It was stamped with a raised seal and signed by an officer,” Florence recalled. “Just in case that situation was to come up, I had that document.”

But it did no good. On the day of his arrest, his wife April was driving, but when the trooper checked the car’s owner, he found the warrant for Florence’s arrest. April retrieved the document, but the trooper said he had to go by what was in the computer.

There is a dispute about what happened next, both at the Burlington County Detention Facility, where Florence was first held, and at Essex. Standard procedure at Burlington is for those about to enter the center to undergo a “visual observation” while the detainee showers with a delousing solution. Florence contends he was also ordered to “open his mouth and lift his tongue, rotate, and lift his genitals.”

At Essex, Florence said he and other men being admitted were forced to “open their mouths, lift their genitals, turn around, squat and cough.” Essex officials in court papers say their guards observe inmates disrobing and taking a shower and search their clothes for contraband.

Florence was at Essex only a short time before a judge ordered his release.

The federal judge who heard Florence’s lawsuit said that even if the jails’ versions of events were accepted, such procedures still constitute strip searches. Under the Fourth Amendment, that requires reasonable suspicion, the judge said.

He based his decision on the Supreme Court’s 1979 ruling in Bell, which required “a balancing of the need for the particular search against the invasion of personal rights that the search entails.”

But the appeals court in Florence’s case aligned itself with a new view of the Bell decision that holds blanket search policies are constitutional.

The Essex County jail argues that is the proper reading. “Expert opinions presented here establish that strip- and visual body-cavity searching all newly admitted inmates is the most effective way to limit contraband,” wrote Washington lawyer Carter G. Phillips, who is representing the facility in Florence v. Board of Chosen Freeholders.

The jails and their advocates say that Florence’s solution — requiring reasonable suspicion to strip-search those with minor charges — would in practice create a route for those intent on smuggling weapons or contraband into jails.

The U.S. Court of Appeals for the 11th Circuit in Atlanta said that under such a policy, gang members might “coerce, cajole or intimidate” others into getting arrested on minor charges just to smuggle contraband.

She said in her brief to the court that 18 states, including New Jersey, prohibit suspicionless search. And she said there was no proof or logic supporting the argument that people would try to get arrested on minor charges to bring contraband into a jail.

At any rate, Florence said, the situation does not apply to him: He certainly wasn’t planning his arrest — he vigorously protested it.

“What threat did I pose?” he asked.