WASHINGTON – Albert Florence was riding in a car with his wife and son on a New Jersey highway in 2005 when he was picked up on a warrant for an outstanding fine, taken to jail and, as part of routine processing, ordered to strip naked. 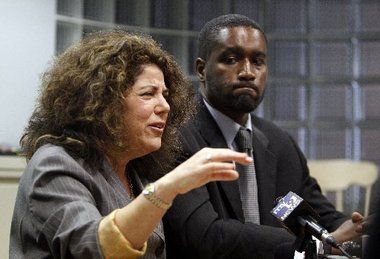 By Ed Murray, The Star-Ledger
Albert Florence and his attorney Susan Chana Lask
discuss in April a case the Supreme Court will hear.

Florence said he went from the elation of having just bought a new home — the family was headed to a celebratory dinner — to the degradation of a strip search. And the arrest warrant was in error. Florence had paid the fine.

“It was a big shock,” Florence, 36, the finance director at a car dealership, recalled before Wednesday’s Supreme Court case over his ordeal. “I had just finished purchasing a home. It was a huge accomplishment to be living the American dream. Then, in a matter of moments, I was being processed like an inmate. … After that all happened, I cried, and I hadn’t cried since I was a child. I just had so much emotion from being scared, humiliated.”

The question for the justices is whether, under the Fourth Amendment’s protection against unreasonable searches, jails may strip-search people arrested for minor offenses, no matter what the circumstances. Once naked, Florence was ordered to open his mouth, lift his tongue, hold out his arms, turn around and lift his genitals. He went through a similar search after being transferred to another county jail. Once naked, he was ordered to squat and cough.

Florence’s appeal comes two years after the justices ruled that Arizona school authorities’ strip-search of a 13-year-old girl suspected of carrying drugs violated her rights. The majority emphasized how being forced to strip naked is a singular intrusion on privacy.

Yet the high court has given jailers wide latitude over how they treat prisoners because of security interests. In Florence’s case, a lower federal appeals court ruled for Burlington and Essex Counties, saying routine strip-searches during processing are justified based on authorities’ concerns that weapons, drugs and other contraband might be smuggled into the prison.

“Jails and prisons are fraught with danger,” says Alan Ruddy, assistant Essex County counsel. “There’s an infinite amount of contraband that comes in. A strip-search is the best way to deter it.”

Florence sued on behalf of a class of individuals who were strip-searched after being detained for minor infractions. His lawyers say the group includes people picked up for driving with a noisy muffler, failing to use a turn signal and riding a bicycle without an audible bell.

Among the outside interests siding with Florence are a group of psychiatrists and advocates for victims of domestic violence. They point up the traumatic effects of a strip-search, especially among women.

On the other side, backing Burlington County and Essex County, are the U.S. Department of Justice and twelve states, stressing the dangerousness of jails. They say the case is controlled by past rulings tied to the needs of correction facilities.

Lawyers for Florence, who is African American, raised racial concerns. They tell the justices in their written brief that Florence kept a copy of the document clearing up the warrant handy “because in his view he had previously been detained as an African American who drove nice cars and he wanted to avoid being wrongly arrested.”

Florence’s wife, April, was driving the family BMW when it was stopped in 2005. The trooper arrested Albert Florence based on a 2003 warrant erroneously in a state computer system. That warrant for failure to pay a fine stemmed from Florence having fled the scene of a stop in 1998, then pleading guilty to hindering prosecution. He was sentenced to two years probation and a fine he paid at the time of the arrest in 2005.

At the core of the constitutional dispute before the justices, the opposing sides argue over how to apply the 1979 Supreme Court case, Bell v. Wolfish, in which the justices upheld strip-searches for prisoners after visits with outsiders. That case has divided lower courts, resulting in a split over whether a blanket policy of strip-searches for all those arrested is constitutional.

Florence’s lawyers say jailers, and judges, must take into account the individual and his offense. “There is no reason to strip-search this particular group of people” arrested for non-criminal offenses, says Susan Chana Lask, Florence’s lead lawyer. She says government’s interest in deterring contraband does not outweigh the wholesale intrusion on personal privacy.

Burlington and Essex County officials counter that Fourth Amendment privacy protections do not cover the processing of prisoners. They argue that past cases do not distinguish among people arrested based on their alleged offenses.

Michigan and the 11 other states backing the New Jersey counties contend routine strip-searches protect the safety of everyone in jail. They say more than 13.5 million people spend time in jail or prison each year.

Washington lawyer Carter Phillips, who will represent the counties Wednesday, emphasizes that once any of those millions of people enter the corrections system, they lose an expectation of privacy. Preventing the type of search that occurred in Florence’s case, Phillips says, would let prisoners hide “small but dangerous items that threaten institutional order and security.”